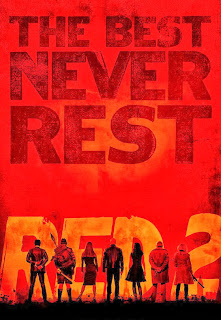 I was pleasantly surprised that I really enjoyed Red 2. On the heels of his sleep-walk of a performance through the terrible fifth Die Hard film, I thought that maybe Bruce Willis had just given up. Luckily, under the direction of Dean Parisot (who also directed the hilarious sci-fi cult classic Galaxy Quest), this comic book sequel attains the rare achievement of being even better than the original. Red 2 is a real crowd-pleaser, and received lots of laughs and even a round of applause at its end from the crowd. Maybe there is still hop for Mr. Willis after all. At this point I would much rather see a Red 3 then a Die Hard 6.

Red 2 screens one last time at the Mayfair, tonight at 7:00pm
Posted by batturtle at 8:52 AM