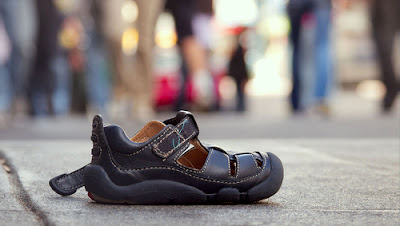 I don't know about you, but whenever I see a single shoe on the sidewalk or in the middle of the road, my instant first assumption is that someone has been shoved into the back of a trunk, and in the ensuing kidnapping struggle the person's shoe has fallen off. My girlfriend, a more logical and smarter person than I, pointed out that when I see something like that, it's likely just a shoe from a change of shoes that has fallen out of someone's back-pack. I kid you not, I never even contemplated that in all the years of thinking that seeing a singular show in the middle of the road was the result of crime.

When discussed with one of my Mayfair brethren, he not only agreed with my kidnapping theory, we also then to the leap to the conclusion that a mysteriously left behind single shoe could be the result of alien abduction. My girlfriend still went with the boring and more real world lost object theory.

The reason that this discussion came up was that on a walk to the Mayfair last night, not only did we walk past a shoe on the sidewalk, we then walked by the much more bizarre abandoned baby stroller on a street corner. Not only an abandoned baby stroller by the way, it also had an empty wine bottle in it. And that's all of the story that I know. Will never know what the hell that stroller was doing there all alone on a street corner at nine o' clock at night. Though I will of course assume that the baby was kidnapped by drunk aliens.
Posted by batturtle at 8:39 PM