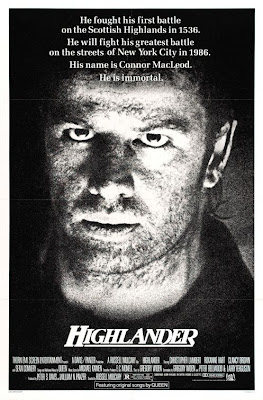 He fought his first battle on the Scottish Highlands in 1536. He will fight his greatest battle on the streets of New York City in 1986. His name is Connor MacLeod. He is immortal.

Tonight (Mon - Nov - 7th) at 9:45pm the mini-series of Lost Marbles 80s Nights at the Mayfair wraps up with The Highlander. There were many a sequel and spin-off to the 1986 fantastical swordplay epic, but let's just all pretend this movie is a stand-alone story and we'll all be a bit better off in the long run. The film of course features not only Sean Connery again not bothering with attempting to put on an accent that would fit his character, it also has Queen music and is from the director of geek cult classics the likes of The Shadow and Resident Evil: Extinction. And although there isn't really much in the way of Highlander merchandise floating around, Lost Marbles still managed to cobble together a couple nifty prizes to give away.
Posted by batturtle at 4:13 PM