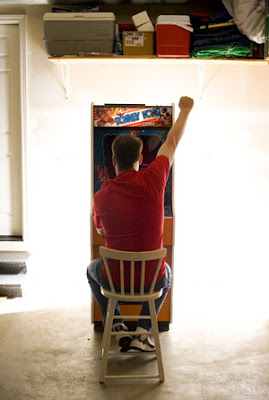 I know it's a pretty heady statement, and it's never good to get people's hopes up too high before seeing a movie, but I'm pretty sure that King of Kong might be my favorite documentary...like ever.

Who could've ever have imagined that the world of competitive video game playing could be more exciting than the average big budget Hollywood blockbuster? More specifically, a documentary about a competition revolving around a fairly simple early generation game where a King Kong knock-off tosses barrels at you (you being Mario in this case). And on top of that, the movie hits you with a more insane unbelievable story, and one of the best hero / villain match-up's you've ever seen.

Don't miss out on the special Lost Marbles Geek Night screening of King of Kong: Fistful of Quarters. You'll never look at a video game the same way again.