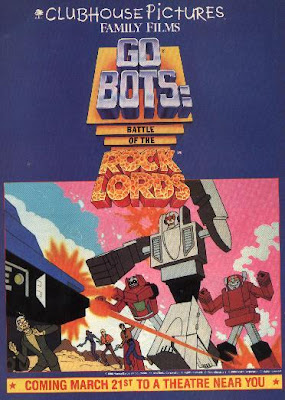 I cannot tell a lie. I have absolutely no emotional connection to the GoBots and their fight against (or with?) the Rock Lords. None the less, I think the concept of showing bad Hanna Barbera style 80's Saturday morning animation up on the big screen a great thing.

GoBots being screened at the Mayfair came to fruition upon tying to get a hold of the Transformers animated movie (best death scene in a movie EVER!). It, alas, is unavailable. That lead me to jokingly ask 'Can we get the GoBots movie?' To which the Mayfair's head programmer said 'There's not a GoBots feature is there?'. And sadly enough, not only did it exist, but it was available. It's a strange backwards world.

So, although I haven't actually seen this movie, I can guarantee you this: It is better than a Michael Bay robot movie. Promise.

Sunday Night Geek Night:
GoBots Battle of the Rocklords - June 13th at 9pm at the Mayfair.
With upwards of NINE GoBots toys to give away, thanks to those fine geeks over at the Comic Book Shoppe
Posted by batturtle at 4:41 PM