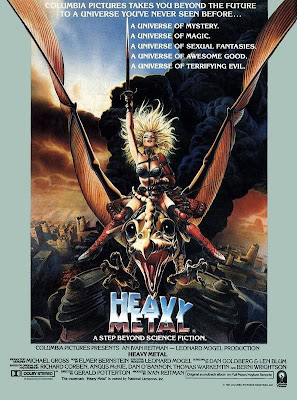 Having the adult animated comic book anthology Heavy Metal play at the Mayfair puts geeky Kodachrome memories of my high school youth back into my brain. I watched the film a number of times back in the long ago times of the late 80's to early 90's.

The comic magazine itself, was exploitative, filled with lots of sex and violence, outer space and monsters, a ton of imagination, and work from some of the greatest writers and artists around (what more could a 13 year old want from a publication!?).

Plus, in a local bit of film history, the project was partially animated in none other than Ottawa.

The very nice looking re-release print of Heavy Metal, on June 6th at 9:30, only at the Mayfair, only for Sunday Night Geek Night.

Oh...and we'll be giving away some swell DVD's thanks to our friends at the bestest video store around, Invisible Cinema.
Posted by batturtle at 7:03 PM