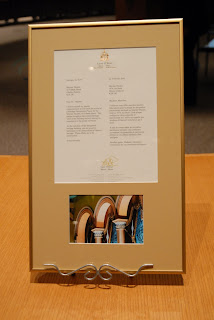 A couple days ago, I accompanied some of the rest of the Mayfair gang over to city hall for a Heritage Day presentation ceremony. The Mayfair won the 'best theatre architecture in Ottawa ever' award...or something along those lines. The funny part is the nice congratulatory letter signed by the mayor. He was pretty much nothing but unsupportive and against any attempts made in saving the place. If it were up to him there'd be no Mayfair in existence right now. Take that Lex Luthor! (he looks like Lex Luthor).
Posted by batturtle at 11:11 AM