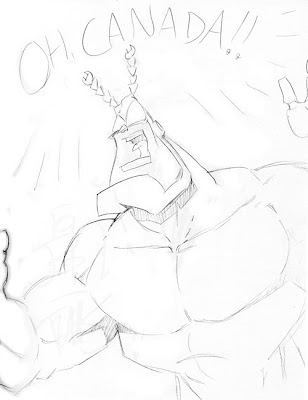 Tick by Gabe Crate
More sketches! Oh what an age of wonders we live in! Above, I'm sure that you will recognize the mighty blue force of justice himself, The Tick. In my first Year visiting San Diego, I was lucky enough to meet and get a sketch from Tick creator Ben Edlund (he also directed maybe my favorite 'Angel' ever). Year two, I got another sketch of the character from another fine Tick artist, Gabe Crate. He also gave me a copy of his comic, 'The Flickers'. Which I highly recommend you track down. It's funny and evil and actually made me laugh aloud while reading it. 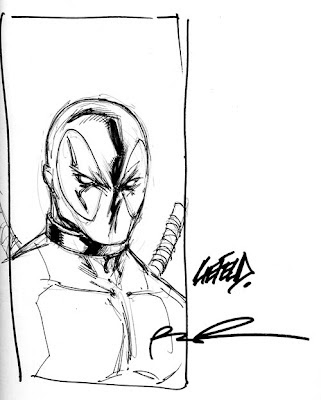 Ok...I know that hate is a strong word, but I hate Rob Liefeld's artwork. As should any other rational comic book reader with anything close to the smallest amount of good taste and reason. With all those teeth, scratchy ink lines, awful anatomy on everyone, panel to panel continuity thrown out the window. BUT, I would feel really bad if by some fluke he stumbled on this lil' blog, read that, and that my statement hurt his feelings. 'Cause he is likely the nicest comic book guy that you'll ever meet. It has been my goal to acquire a sketch from him for quite some time. Not sure why. Some kind of ironic, humorous take on my enjoyment of the world of comics. Like a fan of Elvis getting one of those velvet Elvis paintings. Or I'm just a jerk. Or a bit of both. I'm sure that Rob's millions of dollars and mega success keep him unworried about critics though. 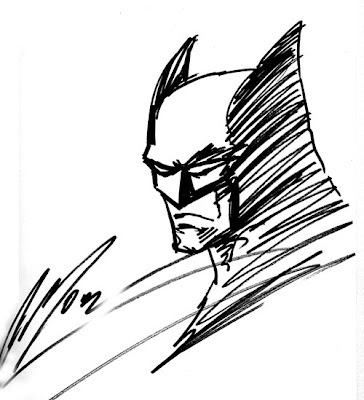 I showed off this Batman sketch to my friend Tom (who draws comics for a living), and he was unimpressed. Then I said "Grant Morrison drew it!", and he thought it was much cooler. I had gone to a DC panel solely to see Grant. As per usual, he has a tendency to blow yer mind with his stories. If he ever starts up a crazy cult, I'll be first in line to sign up. Later in the day, I was at Dark Horse Comics land, and my friend ran up yelling that Grant was signing at the DC area! I immediately sprinted my way over. I had nothing for him to autograph, so I was just going to get him to sign my sketchbook. Then, next thing you know, he's drawing me Batman. How did he know I liked Batman!?! THEN, he drew my friend Al an Animal Man. Which is Al's favorite Grant Morrison related character! He truly has magical powers greater than we average humans can understand.
Posted by batturtle at 10:27 PM