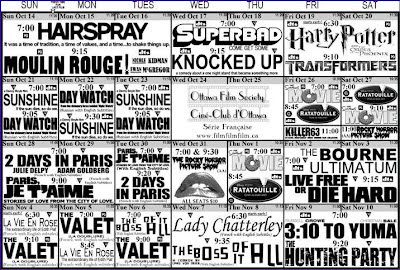 Y'know...it's when the lil' dreams that come true that you have to stop, take a moment, and appreciate them. For the second year in a row the Killer63 presents a batch of short horror films, all making their premiere at the Mayfair. I love the Mayfair theatre. In high school my friends and I practically lived there. Memorizing Monty Python, shooting cap guns at the screen for John Woo films, spending full days avoiding sunshine by instead watching Star Trek marathons. And now I get to go see something I directed and the work of a bunch of my friends up on that same screen. Friday October 26th, 11PM (on the same night as a Pixar movie...that is also geekily cool!), spread the word, bring your friends.