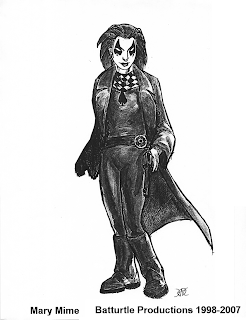 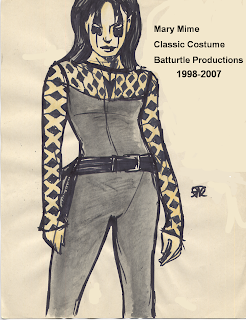 My favorite character in the Villains U is Mary Mime. A kick-ass backstabbing evil mastermind with pale white skin, spades tattooed over her eyes and a penchant for brutal violence. She may or may not show up in some of the scripts that we're compiling for the initial pitch. She doesn't appear in the one that I've completed. That would be a Christmas episode starring the central three loser characters of Crime King, Ghostman and Ric (changed from Rick for comedic spelling reasons). I'm sure she'll show up sooner or later though.
Posted by batturtle at 1:10 AM