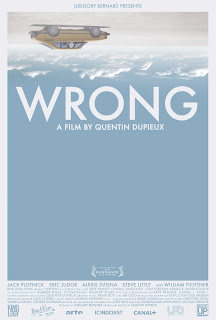 It's safe to say that the films of Quentin Dupieux are not for everyone. I fine his darkly comic abstract work to be mesmerizing bizarre indie masterpieces. His previous directorial effort featured a murderous rubber tire, various reality bending moments, and characters within the movie who knew they were in a movie. There's no secret origin revealed, there's not much in the way of a conclusion, and I completely loved the thing.

His latest directorial effort might seem a bit more mainstream at first, as it's a story about a man who wakes up and finds out that his dog has gone missing. It is of course much more complicated and weirder then that. Clocks flip over from 7:59 to 7:60, an office is drenched in water sprinklers and no one seems to make notice, a self help guru communicates through some form of magic powers via unknowing lackeys. None of these or any of the other weirdness is explained...this is just the normalcy of a world crated from the mind of Quentin Dupieux.

You have one last chance to revel in the enthralling insanity of this new generation David Lynch / John Waters at the Mayfair, tonight at 9:30pm.
Posted by batturtle at 9:51 AM