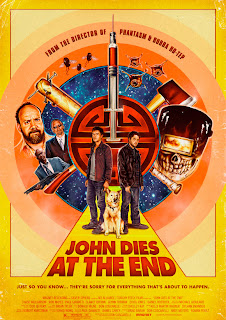 John Dies at the End is the new film from Don Coscarelli, shockingly enough his first feature directorial effort in a decade. He's been thanked on half a dozen movies, written and directed an episode of Masters of Horror, but somehow a whole ten years has passed by since the cinematic brilliance that was Bubba Ho-Tep.

The elderly Elvis Presley vs cowboy mummy masterpiece is a mighty accomplishment to follow-up, especially for me since it is one of my favourite movies of all time. I had a feeling that the movie might be weird and fun in a good bad movie kinda way, and was happily surprised that it was indeed great and is surely destined to become a cult classic.

I thought I might have no idea what was going on in a David Lynch kinda manner, but the screenplay was very well crafted. It was an impressive puzzle piecing adaptation of the novel, especially considering the Doctor Who timey wimey aspects of the plot. Chase Williamson and Rob Mayes, both newcomers enough that I don't believe I've seen either of them in anything before, turn in fine performances as a pair of slackers who fall into a supernatural world of monster hunting and universe saving. Paul Giamatti turns in a fine supporting role, and you even get to see Doug Jones in a rare non-monster costumed performance (as you may have seen him in Hellboy or Pan's Labyrinth). All of this plus nasty slugs, giant monsters, bug aliens, gross spider things, a meat man and a heroic dog.

We can only hope that we get another bizarre piece of movie magic from Don Coscarelli again before 2022.

Catch John Dies at the End on Tuesday April 9th at the Mayfair.
Posted by batturtle at 11:50 PM