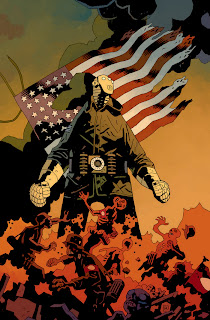 I love Mike Mignola's Hellboy universe of comic book characters. Especially great is how he hasn't rested on the singular popularity of Hellboy, in fact, for the past few years Hellboy has appeared in many fewer issues than his other Bureau for Paranormal Research and Defense characters have been more in the front line. Former Hellboy sidekick, the fish-man Abe Sapien recently graduated up to reular ongoing series status star, and other bizarre characters like Lobster Johnson show up in their own mini-series every so often.

The latest strange character from the mind of Mike Mignola to spin off into his own mini-series is Sledge-hammer 44, which at first glance seems to be a World War II Iron Man. Because the character is in the Mignola-verse, that rather simple concept ends up being much more imaginative and interesting. Best of all, is that Dark Horse seems to have learned lessons from the mistakes of bigger goliath companies like DC and Marvel. Sledge-hammer 44 is a two issue series that you can enjoy is you are a Hellboy super-fan, or if you have never heard of Hellboy and just think that a guy in a robot suit fighting Nazi's sounds like a cool thing to read about. You don't have to buy three dozen other books to know what the hell is going on.
Posted by batturtle at 3:11 PM