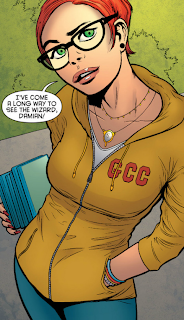 The latest super-hero story-line twist that DC Comics has released onto their New 52 Universe is the introduction of Carrie Kelley. Carrie is a creation of Frank Miller, a female Robin side-kick to a crazy senior citizen Batman in the 1980's comic book masterpiece, The Dark Knight Returns.

Of course, not so surprisingly, this development has caused an unleashing of anger from many nerds on the interwebs. I avoid most of these comments by trying to stay away from comment boards on various geek websites. My eye has unfortunately caught a few bouts of typed out negativity though. What always drives me crazy about this kind of stuff is it's a level of critiquing anger leveled towards a thing which they have not even read yet. If you read it and don't like it, that's fine. How about we refrain from death threats to comic book writers at least until the topic of the subject is read? Actually...y'know what...just don't send death threats to someone because they wrote something you don't like in a comic book. Take a step back and realize that that is lunacy. Would you like receiving death threats? I don't think so.

I have read Batman & Red Robin # 19 (Batman will have rotating side-kick guest stars for the time being after the heartbreaking loss of Damien), and I liked it a lot. Carrie is indeed in it, though the Robin connection is a bit of a misdirection. The actual story explores how Batman is acting even more off-kilter than a guy dressed like a bat normally does, and how he is acting in a state of vigilante genius mourning. As the title states, previous side-kick Tim Drake guest stars in the book, as does the less likely guest-star of DC's take on the Frankenstein Monster.

Peter J Tomasi and Pat Gleason have written and drawn an impressive run on their Batman title. I think it's hands down the best Batman comic now that writer Grant Morrison is finishing up his run in Gotham. The curse of a shared universe is that you have to fall into pace with what happens elsewhere. I have a feeling that they would have liked to continue to tell stories with Damien Wayne as Robin, but that was not meant to be. I don't care how it's done, I don't care if it's some horrible magic or alien twist, I want Damien back. Until that happens though, or even if it doesn't, I look forward to seeing what these guys do with this book now. A lot of geeks have said that there's nothing good from DC's New 52 line. I have a feeling they haven't read Batman & Robin.
Posted by batturtle at 2:11 PM