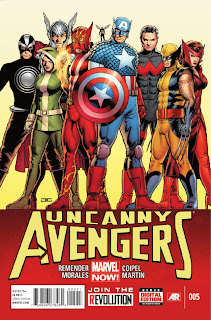 There was an interesting non-super-villain punching twist in writer Rick Remender's Uncanny Avengers # 5. The series focuses on a team of combined Avengers and X-Men, assembled by Captain America, to promote unity on the heels of a super-hero disaster which resulted in an alien possessed God like Cyclops killing Professor X. The captain put mutant X-Men alum, and Cyclops' little brother, Havok on the front-line as the leader and face of the team.

At a press conference, Havok stated, "I see the word mutant as divisive. Old thinking that serves to further separate us from our fellow man. We are all humans. Of one tribe. We are defined by our choices, not the makeup of our genes. So, please, don't call us mutants. The M word represents everything I hate.". A reporter then asks what should he be called then if not a mutant, and his response is "How about Alex?".

By the time it took me to read and get around to writing about this, the comic has already caused the usual harsh retorts and angry rants from some of the online nerd community. I think there are two things to remember before sending a person death threats over plot-lines in a comic book. 1 - The views of a fictional character are not necessarily those of the writer. 2 - Characters have to do and say things that may lead to conflict. If not, stories would be very boring.

I for one am very intrigued by this take on the mutant cause within the Marvel universe. I don't think Havok is being disrespectful or flippant or uncaring. I think he is pointing out that no matter what we look like, no matter our strengths or weakness, no matter what cool things we might be able to do that someone else cannot...we are all human beings. I think that that belief is a train of thought that can be admired within a super-hero role-model world.
Posted by batturtle at 4:21 PM