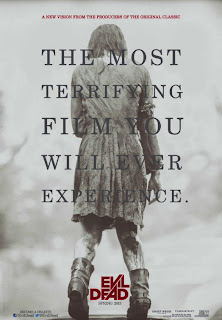 I very rarely venture out of the safe and high quality surroundings of the Mayfair for my big screen movie watching. Usually the only time I'm not at the Mayfair for watching movies it's because I'm doing to so at a special event like the Ottawa Animation Fest, or Fantasia or the Montreal Comiccon. A couple times a year I will go to the multiplex to see a new Hollywood release, but I never spend money in doing so. I will make use of points off of my Visa card or I'll be going because I got a hold of some advance screening preview passes. That helps me feel as if I'm not cheating on the Mayfair.

Last night my friend was nice enough to take me out for a belated movie night viewing of the new Evil Dead movie. I am fairly confident that we will screen the latest deadite gore-fest sometime in the near future, but I've had bad luck with spoilers of late and wanted to see the film before some jerk ruined plot twists or surprises for me. I unfortunately came to remember something last night. I hate multiplexes. I don't just say that as a repertory theatre owner.

Well, to be fair, in this instance there was nothing wrong with the multiplex side of the screening presentation. In recent past there have been all kinds of different issues with my multiplex movie viewing experience. This time around it was really more my loss of faith in humanity vs sub-par movie patron customer service. I don't want to generalize or profile, but when a overweight Vanilla Ice looking 20-something in a too small Chicago Bulls cap and too big Chicago Bulls jersey rolls in with a similarly attired gang of incorrect baseball cap wearing guys and reality show star looking girls roll in, there is a sense that annoyance is on the horizon. And it was indeed annoying with lots of talking and cel phone checking on their part.

Then there were a group of women sitting behind us who somehow seemed to not realize that they had bought a ticket, entered a theatre, and had instigated the interaction of being in the presence of a horror movie. I think they thought that a movie called Evil Dead was a Julia Roberts romantic comedy or involved a plot-line in which Matthew McConaughey learns himself a valuable lesson. And half the audience thought it was completely acceptable to comment along with the movie as if they were sitting at home with a friend on the couch. Not just punk kids, but grown-up productive members of society who should know better and feel ashamed. After the experience I feel I'm happy to stay in my Mayfair home at all times to watch movies.

Anyhow, the good news on the night is that despite the sub-par and frustrating surroundings, I loved the movie. Fede Alvarez makes his feature film directorial debut and does so with style. What we have here isn't just a carbon-copy or unnecessary remake like The Ring or Friday the 13th, but an impressive addition to the Evil Dead legacy. It's scary, it has brains, some striking performances from the young cast, and most importantly is really scary.

The movie is produced by Sam Raimi, Robert Tapert and Bruce Campbell, the masterminds behind the previous three Evil Dead films. They are actual producers on it too, not just slapping their name on it in exchange for a pay-cheque. As people love to point out, Hollywood is in the midst of loving unoriginal properties, whether they be remakes, reboots, sequels, prequels, spin-offs or adaptations. I like to have a glass half full view on the situation, and look at examples like Evil Dead as filmmakers making the best of the situation. If we are going to have another Evil Dead movie instead of another new concept along the lines of Drag Me to Hell...I'm glad that those involved are giving it their all and making worthy films none-the-less.

We can only dream that the box office success so far ($29 million in its first four days off of a $17 million dollar budget) will lead to another horrific Evil Dead adventure, maybe even one with Bruce Campbell doing more than producing duties and stepping in front of the camera.
Posted by batturtle at 1:27 PM