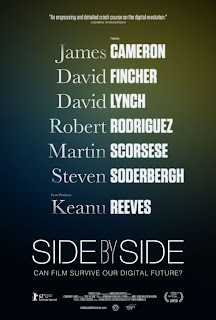 I have totally accepted and embraced our cinematic digital over-lords. There are still some fans of the cinema who fear the change, some who have even gone to the extent to threaten to never return to a theatre unless it is screening a 35mm film. It's not that I don't understand the concern that some have about changing technology, I can identify with the romantic aspects and age old tradition of film spooling through a projector. I have a film strip filled with some of my favourite things tattooed on my arm.

At this point though, complaining about digital cinema presentation is a lost cause. It's not even a battle worth fighting or worrying about, film is pretty much extinct. If you want to watch movies, those movies are almost all being shot via non-35mm means, and are being projected via a non-35mm system. If I read a comic book on a tablet instead of off of paper is it not a comic? If I listen to my favourite band on an MP3 player instead of a record player are they not still songs? If I watch a movie on VHS or DVD or Blu Ray or 35mm or digital projection...it's all still watching a movie.

Not only is digital projection still watching a movie, it's watching a movie in such high quality that most viewers would have no idea of the difference. If fact, considering how poorly prints have been treated over the years, you are more likely to an enjoyable unhindered movie watching experience via digital than a poor ole' beat up film print. Recently at the Mayfair we've had movies like Duck Soup, Abbot & Costello Meet Frankenstein and Jason and the Argonauts...all were digital and all were gloriously pristine in their presentations. There is unfortunately absolutely no way that such could be said for film presentations...more so, there are no film prints in existence for us to screen of these classics.

Anyhow...I watched a very well put together documentary on the subject titled Side by Side. It is hosted by Keanu Reeves, and it is super evident that Keanu loves the 35mm film. It is a very even and interesting account on the past, present and future of movie production and distribution. Interview subjects include filmmakers such as Martin Scorsese, George Lucas, Danny Boyle, David Lynch and a whole bunch more. Side by Side is on the Netflix for your at home movie watching enjoyment.

What I think it all comes down to is that there should be more concern about whether the movie is good or not, instead of what kind of camera it was shot on and what the projector looks like. Does it look good up on the screen? Yes? Great. Then don't fret about whether it's projected via celluloid magic or digital magic, just sit back and eat your popcorn, drink your Coke, and enjoy the over-all movie magic.
Posted by batturtle at 11:33 PM