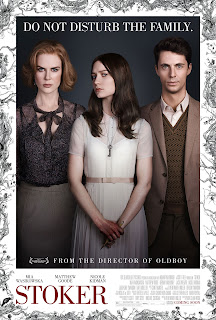 I appreciate the career that Nicole Kidman is undertaking, she could very easily stick to the mainstream for all of her acting choices, but it's clear that she has an interest in helping to tell more diverse stories. Sure, every once and a while she shows up in a Bewitched or Stepford Wives, but more often then not in her career it's clear that she's willing stay a bit out of the limelight of Hollywood safety. For evidence to her willingness to take some risks in her script choices, please see som of the more bizarre films in her filmography the likes of Dogville, Birth, Fur: An Imaginary Portrait of Diane Arbus, or Rabbit Hole.

Next comes Stoker, for Nicole's latest out of the norm character choice, a strange family themed Hitchcock influenced gothic tale about life and death and the end of innocence. The film marks the English language debut of South Korean director Park Chan-wook, whose previous credits include acclaimed disturbing cult classics Oldboy and Thirst. It also of not that it is sadly one of the final producing efforts from the late great Tony Scott and his brother Ridley.

Nicole Kidman delivers another stellar performance, and in a few key scenes is so fierce that I actually found myself thinking, "Now that's some acting!"

Enjoy some top notch performances and a bunch of really creepy moments in Stoker, which screens at the Mayfair tonight at May 2nd at 9:15pm.
Posted by batturtle at 9:46 AM