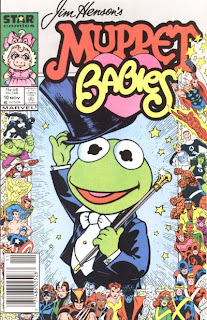 While listening to an episode of the FEaB podcast, the topic of Muppet Babies came up between hosts Matt Mira and Scott Mosier.

The Muppet Babies cartoon featured lil kid versions of Kermit and Gonzo and all the other mainstay Muppets in imaginative day-care adventures. There were never any scenes of the Muppet kids being dropped off or picked up by parents, so it might've actually been an orphanage, I'm not positive.

As we all know, The Muppet Movie establishes that the Muppets all meet up as adults as Kermit instigates a road-trip to Hollywood to attain fame and fortune. Contradictory to that, in the teevee special A Muppet Family Christmas, there is a scene in which the gathered Muppets watch a home movie from when they were babies. Meaning we have conflicting histories in the Muppet-verse, one time-line in which they've been friends since they were kids and one in which they meet as adults. The only possible reasoning is that the bulk of The Muppet Movie is of course a based-on-a-true-story account bio-film that the Muppets have produced and are watching.

So, Muppet Babies, book-ends of Muppet Movie with the Muppets in the theatre, and Muppet Family Christmas are in continuity...core of Muppet Movie is the Muppets acting in a movie in which they play themselves and re-tell a fictionalized account of their origins. I'm glad that we could get all that mess figured out. Now, the real issue of concern is that the Fraggles in Muppet Family Christmas are the same size as Kermit, when we all know that they are much tinier then that. What the hell is the deal with those enormous Fraggles?
Posted by batturtle at 1:40 PM