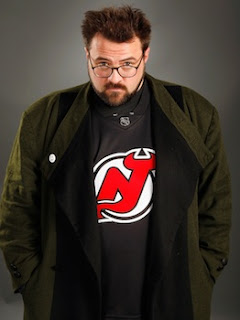 I know that the man has a rabid fan base who would disagree with me, but I'm just not a fan of most of the film-making works of Kevin Smith. I loved and was inspired by Clerks, and I thought that Red State was an impressively put together and well written piece that finally showed evolution on the part of the screenwriter and director. Everything in-between, from Chasing Amy to Cop Out, left me unimpressed to neutral in my opinion. I don't think I hated any of his movies, but I thought that they all seemed a little guilty of too much fun and not enough work.

On the other hand, I think that Kevin Smith makes a great interview subject, host,and makes the most of the social media and podcast world that he finds himself a corner-stone of currently. Plans always change, he said that Jay & Silent Bob Strikes Back was his farewell to the View Askew characters, and then a few years later Clerks II hit the silver screen. He said that his farewell to directing would be a hockey movie, now it seems like his next film-making effort will be a third Clerks. It does seem now though that the foreseeable future of the creative output of Kevin Smith will come mostly in the form of non-fiction writings, podcasts, and live performances of his not-quite stand-up storytelling kind of shows.

I just finished listening to Kevin Smith's audiobook version of Tough Shit: Life Advice from a Fat Lazy Slob Who Did Good (as read by the author). Kevin's life story (so far) is a good story indeed. A young geek with dreams of making movies, throws caution to the wind, and sets out to make a no-budget semi-autobiographical movie with his friends. It worked, and a little under two decades later he finds himself with a loyal army of worshipers of his movies and winner of a batch of indie awards and street cred. If that wasn't enough, he also happened to be a comic book geek, and since his film-making career took off he's also gotten to write characters the like of Spider-man and Batman. And he just happens to be a corner-stone Comic Con guest of honour every year. He is living the dream.

The book is a very entertaining listen, I would hazard a guess that even better than reading (not that I'm opposed to words on paper). The author reads it himself in a laid back conversational manner, going off script on a number of occasions. I think I'm very ok with the thought of Kevin Smith giving up on making movies for these other endeavors. I almost feel bad that I don't like his movies more, because I have a feeling that I could sit around and chat with Kevin Smith about Star Wars and comic books for hours.
Posted by batturtle at 1:15 PM