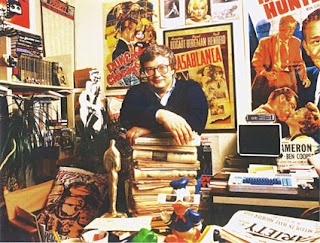 I was working on a documentary pitch for the bulk of the day, and took a brief break to check in on Mayfair social media stuff. I wish that I hadn't, because it really added a depression to the rest of my day. My Mayfair Twitter partner in crime wrote on our Twitter page - "The balcony has closed". Being a geek of the cinema, I instantly understood the reference, and zapped over to google to proceed to get choked up at the news that Roger Ebert had died.

I admit that I never really watched Roger's teevee show all that much. I do my best to avoid spoilers, even before the term spoiler existed, so watching a movie review / clip show kinda' goes against that practice. I also was rather opposed to the thumb up or down rating of a film, seemed all a little too black and white. It too easily put films into a 50 / 50, good or bad and no other possible level in-between of a classification. I would disagree with Roger on occasion. He liked both of the Tomb Raider movies somehow. And his views on video games made him sound quite a bit closed minded and out of touch.

Roger was an amazing writer though. All of his accolades and awards and year's of service easily enough prove that. I was always in the habit of reading his reviews after I watched the movie in question, to see what his thoughts were. I have also read most of his books, whether it be one filled with gushing and deserved praise for Martin Scorsese, or a book filled with reviews of terrible movies. I've never read anything from Roger that wasn't interesting, informative and fun. On top of his writing skills, independent and cult cinema never had a better friend who helped spread the news of their existence to the mainstream.

Unlike many other critics, what I really loved about Roger was that it was evident that he really loved movies. And when he didn't like the movie, he didn't degrade it with insults or bad puns, but would still turn in a review that was a good read despite it's sub-par movie source in question. Roger loves B-movies and sci-fi and the classics, he could equally extol the virtues of Federico Fellini or Russ Meyer, of Woody Allen or a giant monster movie. In the past few years, when his illness increased and his ability to verbally communicate decreased, he because a corner-stone of blogging and twitter, both of which I read daily. And thanks to the magic of the interwebs, pretty much every review that he has ever written is easily available for one's perusal. Sadly, I will never get to read what he thinks about upcoming releases, and I won't get to us his quotes for new movies screening at the Mayfair anymore.

Kind words about Roger will roll in over the next few days and be re-posted on all the geek movie sites. I will read a lot of them, and many will likely leave me choked up and teary eyed. By coincidence, we are screening The General at the Mayfair in the near future. Not just are we screening the Buster Keaton classic, but we also have live musical accompaniment to o along with it. It was one of Roger's top 10 favourite movies, I think he would have enjoyed watching it with us at the Mayfair.

Posted by batturtle at 4:33 PM