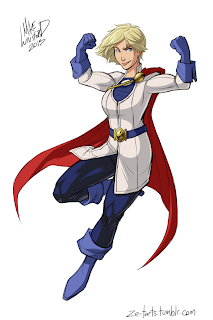 The artist who undertook the challenge of redesigning a bunch of female super-hero icons in a more fully clothed manner says that he didn't do so in any kind of moral code pushing manner. I believe him, but none-the-less it does point out the rather horrible trend in some comics books of revealing costume design when it comes it's female hero's.

This is nothing new of course, seeing as how Vampirella first appeared in 1969. Her traditional outfit is a bit more forgivable seeing as she was from a purposeful B-movie kinda horror storytelling world. When it comes to comic books in the 1990's, things were fairly horrible. Even as a kid I could look at Psylocke's costume in the X-Men and realize that it was pretty ridiculous and the lack of pants didn't really make any sense. Even Supergirl has one back and fourth a bit, and at her costume design worst sported a rather stripper-esque attire that I could never imagine her cousin Kal approving of. I love Power Girl, and the costume design here manages to pay tribute to her geek famous wardrobe, while making use of slightly more real world sensibilities.

I really like all of the fully clothed designs that artist Michael Lunsford whipped up, you can check out the rest of them at his Supernormal Step website.
Posted by batturtle at 3:02 PM