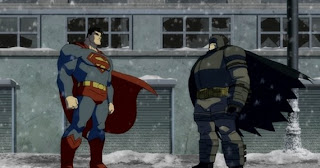 DC Comics may be in the midst of a bit of a bumpy road in getting some of their characters up onto the big screen, but they have no such issues with their animated teevee movie offerings. Superman Returns had all the best intentions, but was a bit of a mess. Green Lantern was one of those dream projects that I never thought would become a reality as a geeky young comic book reader...it was a train-wreck. Christopher Nolan's Batfilms made a lot of money...I could never get over that Batman sounded like cookie monster and had a lame Batmobile. Joss Whedon wrote a script for a Wonder Woman movie, but the Warner Bros powers that be figured that they could find someone better to do a super-hero movie.

Ever since the the Paul Dini / Bruce Timm Batman series of the early 90's, DC cartoons have been on an incredible role of quality output. That show's story continuity and character design style went on to encompass Superman, Justice League, Batman Beyond, a number of small screen films, and the big screen Batman: Mask of the Phantasm (which I think is the best representation of the character that ever appeared in cinemas). After they concluded that universe of stories, they produced a very fun anime style Teen Titans and a bunch of stand alone non-theatrical movies featuring various incarnations of their characters.

I finally got around to watching the adaptation of Frank Miller's 1980's comic book masterpiece, Batman: Th Dark Knight Returns. Despite the looming shadow of having the task of putting one of the greatest and most important comic books ever produced into animation form, they greatly succeeded and did not disappoint. The Kill Bill style cut in two chapters mini-epic features Peter Weller as Batman and Michael Emerson as Joker, both of whom would do equally fine jobs in a live action version of the script I'm sure.

You would think that sooner or later that the film executives would come to their senses and let this team do the big screen movie franchises instead. If that happened we just might have Nathan Fillion as Green Lantern...wouldn't that be a better movie watching world to be in?
Posted by batturtle at 11:45 PM