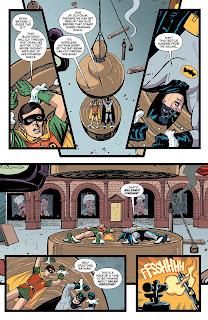 I am loving the Batman'66 resurgence. Not so surprisingly, the colourful campy adventures translate perfectly back onto the printed page that they were initially inspired from. The above is a great page from the recently released Batman'66 Meets The Green Hornet #5. At one point in my youth, I brushed aside the '60's version of the character, in favour of my worship of the dark and gritty incarnation of the mythos. Now,I can't get enough of that era of the Bat, and am looking incredibly forward to the release of the original series on Blu-ray. I also think it would make for a great animated series, I'm sure that Adam West and Burt Ward would be up for a return to voice some Batman and Robin adventures.
Posted by batturtle at 11:37 AM