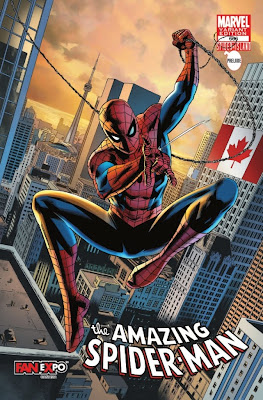 The summer has wrecked my schedule a number of ways thanks to a hectic work schedule amongst other obligations. No more so have things been delayed or halted than my attempts to keep a blog going on a regular basis. By slipping one in under the wire on the last day of August, I at least keep my streak alive of monthly updates, and will again promise to try to be more diligent with writings in the future.

Last weekend three friends and I took a lil' road trip to Toronto to attend Fan Expo 2011. I had a few missions set out for myself while there, succeeded in most of them. Got to meet Jeff Smith, and he not only drew me a quick Bone sketch, he also autographed and sketched in a book that I gave to one of my fake nieces for her birthday. Gaining me super big awesome fake uncle points for now and forever.

Watched the world premiere of an episode of Star Wars: Clone Wars season 4. It was advertised as the season premiere, but then the producer via pre-recorded message said "an episode" of the upcoming season. It had Ackbar in it and was very cool. And the eternal weirdness and joy of comic book conventions is the normalcy of watching a cartoon, mixed with the insanity of watching a cartoon in a room with dozens of folks dressed like Stormtroopers and Sith Lords and Slave Leia's. Many of them brandishing large firearms and / or laxer swords. 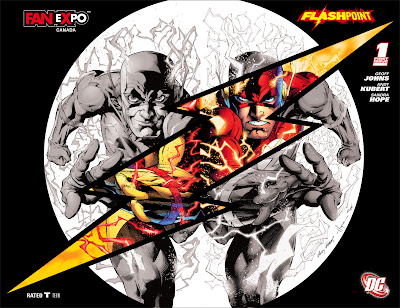 Went to a couple panels on the rebooting of the DC Comics Universe. They were actually quite interesting...well, to me anyhow...to a normal non-geek person, likely not so much. I have to admit that I've gone through the stages of grief on this subject and have come out the other side. I was in denial that they were going to do it. I was angry that they were doing it. I bargained the idea about in my head, trying to figure out if it could be stopped. I was depressed at the loss of my favorite universe. I accepted, and now I'm stressed about it, hoping it's good. And I have to say that listening to the editors and creative staff talk about it, seeing how much of a love of the game they have for the DCU, seeing how enthused they are at the challenge that lays ahead of 'em, they've really won me over. I'm still not sure if I believe the statement that this was 100% the decision of DC Comics and the powers that be at Warner Bros had nothing to do with it. But whatever the reason for zapping everything back to #1, I think they're giving it their all, I think they really want these to be great books, I think that they are super invested and want to make this the best DCU they can. I've gone from jaded to wanting to read everything they publish.

After hours one night we went to a club and watched a geek themed rapper by the name of Word Burglar. He was great. And not in a laughing at him, looking down at him, this is insane kinda great, but as in actually really talented and just happened to be rapping about GI Joe vehicles and Doctor Who. And he had an audience that when prompted all knew that TIE Fighter stands for 'Twin Ion Engine', and that they're not called that 'cause they look like bow-ties.

Spent the last day checking out a couple Q&A's. Katie Sackoff, for whom I didn't get to tell the story of how my friend and I set in motion a chain of events to get a baby named after her Battlestar character. Then, was blessed to be in the presence of William Shatner. That man knows how to keep the attention of a room. Whether it be with his stories of horse racing, working as an actor at a theatre in Ottawa in his youth, or Twilight Zone behind the scenes tales. 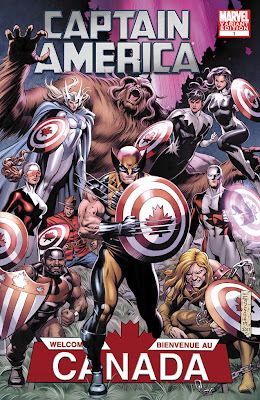 The bizarre highlight of the weekend happened when i was guarding my friends table in artists alley, I looked over the shoulder of some other friends I was talking to, and spotted someone I recognized. I excused my self, bolted around, headed out to the convention floor. I got out there, and lost sight of my target. I a panic, I looked left and right, then saw him. Big guy, glasses, beard, holding two giant bags of comics and swag. I approached and said "Excuse me Mr del Toro?". He turned around with a jubilant "Yes my friend!". Nicest professional geek in all the land, we proceeded to have a nice chat about various things, including the Mayfair. I can confirm nor deny that he gave me his e-mail and that he offered to record an intro for us if we show his films.

So, there are a handful of other stories, but those were some of the highlights from Fan Expo 2011. Oh, and for $5 I got the action figure of Lando wearing Han's clothes from the end of Empire. I love those obscure on-screen for 5 seconds Star Wars toys.

Posted by batturtle at 4:09 PM