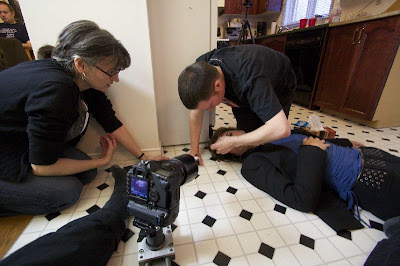 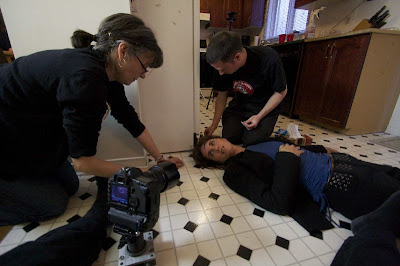 You work on a whole bunch of horror movies and all of a sudden you're always the guy on set asked to dress up an actress with some fake blood to make it look like she has a bullet wound in the head. I wasn't even an fx guy on the project, I was doing sound. Then next thing you know I'm kneeling over an actress as she pretends to be a corpse as I invade her personal space while applying fake blood to her forehead with a Q-Tip. Ah, the fun of crewing on some indie movie magic.

Pretend complaining aside, this weekend I was glad to help out one of my frequent collaborators on a short that she was producing and had co-written. As it stands now the project is called Dry Clean Only, but I hear that that might change by the time the project finishes completion.
Posted by batturtle at 1:23 AM