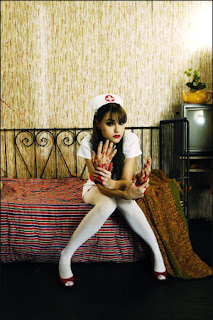 Both might be a slight exaggeration and paraphrasing of what actually happened or was printed. In reality, the Best of Ottawa 2009 poll results were published in the new issue of the X-Press, and the Mayfair got awarded the distinction of the 'best alternative to a multiplex movie theatre'. Which is pretty awesome...though the title of the category still seems a bit strange, plain ole' 'best theatre' would be nice. Anyhow, nit-picking aside, thanks go out to the X-Press for the nomination and all the fine folks of Ottawa for voting.

PS - The cover of the issue features Sasha Grey in 'Smash Cut', which was filmed in part at the Mayfair (and screens November 20th!)
Posted by batturtle at 3:33 PM