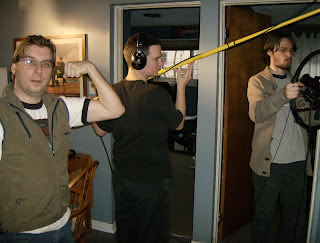 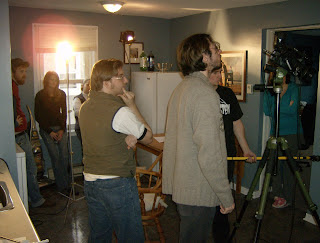 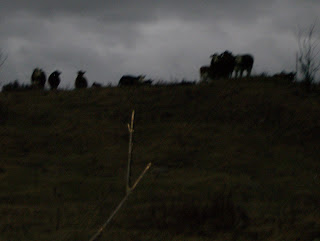 I'm not sure if Brett is trying to show off his manly physique in that first picture, or if he's about to punch himself in the head. Either option is equally strange.

Worked on the final bit of shooting for 'Prey for the Beast' last weekend. Some additional photography of two brand new added scenes. The first couple of pictures are from the scene shot in Jodi Pittman's apartment. Where-in his character prepares to leave on his vacation that ends up going horribly wrong (all death and killer monster attacks). D.o.P. Jera Kenez can be seen in the top photo playing with the nifty stedi-cam steering wheel thing (or 'DS9: the camera' as I dubbed it). I'm showing off my mad boom skillz in both of the interior pictures.

The third picture is an ominous shot of the ferocious man eating cows circling us as we shot a camping scene out in the middle of nowhere. They were ready to pounce as soon as one of us let our guard down.
Posted by batturtle at 5:35 PM