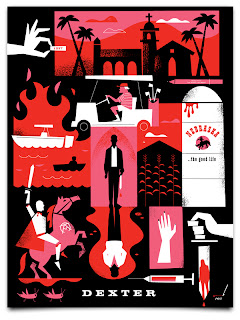 Yes, I am running behind on my tevee watching, but thanks to the Netflix baby steps are being made towards having a slightly shorter 'to-watch' list. Last night we made a marathon through a batch of Dexter's and finished off season six. Maybe it helped that I heard from a number of sources that this was a weak season, but despite negative reviews that I came my way, I really enjoyed the whole season.

Six seasons in, the show has a very different feel than when it started, but I still find that it's quite gripping episodic entertainment. The true compliment to a teevee show is if when you finish watching an episode you can't resist and want to watch the next one right away. Last night we watched five episodes back to back. When the show began, it was really a mystery as to whether Dexter had a soul or not. The series and it's central character expertly swayed back n fourth that his whole life was a sham as to help cover up his murderous ways, then would hint that he actually had feelings and cared for his sister and co-workers and love interests. This far in, it's pretty clear that Dexter does care about the people in his life, that hasn't made the series any less enjoyable from my view-point though.

If Dexter had been adapted from it's novel source material into a feature film, I think that a much different story would have been told. Back when I was in film school another student argued against teevee, thinking that teevee storytelling didn't have the scope of film. I love movies, but that train of thought is hugely incorrect. If Dexter had been a movie you would have gotten two hours or so of character and story development, or maybe six or so hours if it was successful and became trilogy. In six seasons of Dexter you get 72 episodes (I think ranging from about 45 to 50 minutes) of story...logically it's easy to see that characters get a lot more to do in all that time.

This season of Dexter had a religious over-tone. The story points ranged from Dexter being uncomfortable at putting his son into a catholic school run by nuns, to the villains of the arc having an end times biblical theme to their killings. Dexter seasons seem to be broken up and identified by their guest supporting cast, and this one excelled with a pair of villains portrayed by Colin Hanks and Edward James Olmos. And if that wasn't enough talent, Mos Def (currently known as the less rapperly moniker of Yasiin Bay) shows up as a born again auto-body shop preacher with a criminal past who befriends Dexter.

Dexter season six didn't feel stale or worn out of character development or ideas, and made me greatly look forward to watching season seven. After that will come the eight season, which I do believe is the big series finale. I'm still on the fence on whether I want the series to end with him going to jail or continuing along with his murderous anti-hero ways.

PS - If you are a Dexter fan and want to get a hold of one of these awesome posters for your very own wall-space, link on over to the Showtime site.
Posted by batturtle at 11:54 AM