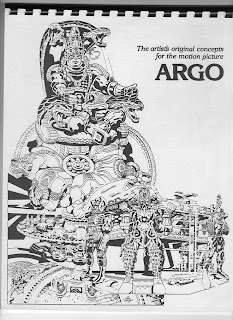 If you would have told me a few years ago that the guy from those Kevin Smith movies and Daredevil and a J Lo video would some day be one of my favourite directors, I would simply not believe you. Yet here we are in a strange but true world where Ben Affleck has directed three impressive films in a row and now it seems like he may be on a career path akin to the one that Clint Eastwood took when evolving from actor to filmmaker. Interestingly enough, Ben's current film Argo is produced by another super successful movie star turned respected filmmaker, George Clooney. In the same vein, I would have similar disbelief if I were to learn back in the late 1990's that Clooney would go on to an incredibly diverse and impressive acting, producing and directing career after the disastrous Batman & Robin.

Argo is the third directorial effort from Ben Affleck, the declassified story of a CIA/Canadian rescue of diplomats from Iran. A rescue revolving around a fake sci-fi film shoot as the cornerstone of the plot to sneak the endangered Americans out of the country. Like all 'Based on a True Story' films, one can never be quite too sure how much of the thing is genuinely factual and how much is truth-bending Hollywood screenwriting. I don't really care about the truthiness of such films though, they aren't documentaries so I don't expect it to be 100% factual. All I care about is if the final product is worthy entertainment, and this film definitely is. Argo has won a dumptruck full of awards so far, and I expect it to win a couple more come Oscar night.

Just as I was looking for a poster to attach to this blog post, I found another amazingly interesting piece of trivia in regards to the real life events from which Argo was based. As referenced in the film, the plan involved building up a back-story of source material like a script and story-boards and production design to help make their fake movie endeavour seem all the more real. The artist who was commissioned to do this work was none other than my favourite comic artist of all time (and artistic mastermind behind The Avengers, X-Men, New Gods, etc...), Jack Kirby! I think Argo is well deserved in it's current success, but like it a little bit less knowing that Jack Kirby could've been a character in the movie. What an awesome geeky missed opportunity that was! I'm a bit angry and disappointed to learn that we could have seen someone playing Jack Kirby in an Oscar nominated movie.

Although Kirby-less, I none-the-less suggest you still check out Argo, which screens tonight (Feb 12th) and Feb 13th at 7:00pm at the Mayfair.