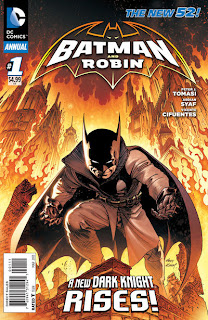 I love all forms of comic book storytelling, but not so shockingly, I do enjoy the super-hero genre when done well (which sadly now-a-days isn't all that often I find). Just like in mainstream teevee or movies or novels, there is the occasional gem amongst the trash. One book that I have been very much enjoying from DC's New 52 line is Batman & Robin, the ongoing adventures of the Dark Knight and his bad-ass somewhat douche-bag of a son with delusions of side-kick Robin grandeur. This series was originally written by Grant Morrison (my favourite writer in all the land), hence stepping into the run classifies as filling in rather larger creative shoes. I enjoyed Tomasi's work in over in the Green Lantern corner of the DC Universe, and he's handled the switch-over to earth bound Gotham crime-fighting tales with style.

The biggest (and deserved) complaint about super-hero stuff from DC and Marvel is that it's hard to find a jump on point to a storyline, and that if you do start a book you then have to buy a bunch of other books in the same shared universe to know what's going on. So, publications like Batman & Robin Annual #1 serve as a great stand alone offering for someone who might be looking to read a cool Batman & Robin story without having to buy two dozen additional comics to know what the hell is going on. Plus it features Titus the Bat-Dog...who is almost as awesome as Bat-Cow.
Posted by batturtle at 1:33 PM