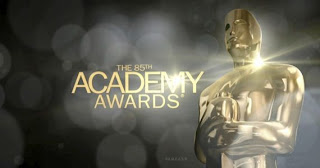 I don't really care about awards that are given out to films. Although they often effect box office receipts in a positive manner for a nominated or award winning film, the amount of awards that a film has does not influence my opinion or interest in any given film. Although the movie business is indeed a business, I would still like to think that there is an art-form to filmmaking.

Hence I've always thought that films can be discussed and studied and torn apart, but that awards just don't really make sense. Someone can win an award for being the fastest or being the strongest or getting the most goals in a hockey season...but giving a statuette to a film and proclaiming it the best film of a calender year seems like a bit of a waste of time. Especially since every single year people disagree with the winners and are fond of pointing out films and directors and actors who they think should have been nominated but weren't. These kind of awards shows, though at times rewarding very excellent films, are often really nothing more than a popularity contest vs true judge of merit. I mean...John Wayne won an acting Oscar...have you ever seen John Wayne act? Army of Darkness was nominated for exactly zero Oscars, and yet it is still one of my favourite movies of all time.

Having said that, even though I don't think that the Oscar ceremonies and what happens at them matters in the grande scheme of things, they can still be fun to watch. If you enjoy watching the Oscars with your friends in your living room with some snacks...just think how much better they would be on a big theatre screen with a crowd of a couple hundred other cinema aficionados. You can do just that at the Mayfair on this upcoming Sunday night. There is no better way to enjoy an awards ceremony hosted by a guy who created a bunch of offensive cartoons. Plus we'll have a bunch of prizes to give away, a liquor license, and the always popular Oscar Poll guess-the-winner contest that always seems to come down to a complicated last minute showdown. All this is absolutely free for members (and if you aren't a member you can join up for a mere $10 bucks).

So why stay home when instead you can have a fun night out partaking in a one of a kind experience that you can only get at the Mayfair? Another reason for out-of-towners who don't live in our fine city of Ottawa who don't have access to a Mayfair of their own.

Doors open at 7:45pm to the live Academy Awards telecast at the Mayfair on Sunday February 24th.
Posted by batturtle at 7:30 PM