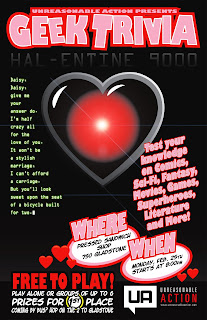 Last night my team was successful in our defense of the Geek Trivia crown. There is no actual crown or trophy or medal or reward...the undertaking is purely taken for pure geek pride and bragging rights. Even though we were stumped in our lack of Jem & the Holograms and My Little Pony history, we made up for it with big points for soundtrack, Star Wars and comic book knowledge. As an added brainiac bonus, the other Rideau Valley Roller Girl team got the Silver Medal (no actual Silver Medal was awarded). We need to get a third RVRG team out there so we can sweep the night.

If you are unlucky enough to not live in Ottawa and hence attending Geek Trivia won't quite work out, equally enjoyable are the Unreasonable Action podcasts. You can keep up to date of the next Geek Trivia night, or listen to over 50 podcasts ranging in topic from the New 52 to Politics & Superheroes to Rad Monsters, over on the Unreasonable Action site. By doing so, I'm sure that you will learn about all kinds of geek stuff which will in turn help you out at any manner of Geek Trivia event.
Posted by batturtle at 11:22 AM