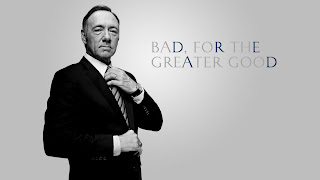 Last night we finished up watching the first season of House of Cards. I thought it was just a mini-series, but evidently the second season is already in production. House of Cards is an extremely dark Shakespearean soap-opera set in the back-stabbing chess game political world of Washington, DC.

Having a series starring Oscar winner Kevin Spacey with the first couple of episodes directed by David Fincher (Fight Club, Seven, Alien 3...yes, I liked Alien 3) is noteworthy enough to grab one's attention. Even more of a point of interest in the scheme of pop-culture history is that this is a series showcasing that kind of talent, and it's not even on traditional teevee. House of Cards is an original series for the great and powerful Netflix.

When Netflix began, I think it was viewed as a second hand video store of sorts. Now brick and mortar video stores are pretty much completely extinct, and network television is floundering with the worst ratings in its history and terrible tabloid reality offerings. I have become quite the fan of Netflix. I see a lot of movie for free, so I make use of Netflix mostly to catch up on teevee offerings, of which there is no shortage. I seem to bump into people quite frequently who say there is nothing on Netflix, these people clearly haven't actually looked at the thing. Every-time I turn it on there seems to be another couple of series and another batch of movies that I want to watch.

I feel very old in thinking that very soon (or currently actually) there will be young folks who have no concept of time-slots or networks or commercials or not getting to watch whatever you want to watch whenever you want to. When I was a kid you couldn't even pause tv. When I was a kid you could only watch all the cool cartoons on Saturday morning! Now I can make my way through 26 episodes of Avengers at my convenience and leisure. So, with House of cards I was able to watch a dozen episodes over 17 days, instead of having to do so over 12 or more weeks. All with not a single commercial interrupting the viewing experience.

The only thing that I love more than Netflix is the fact that soon Netflix will be showcasing new episodes of Arrested Development. It truly is the golden age of televison...or whatever Netflix is.
Posted by batturtle at 2:29 PM