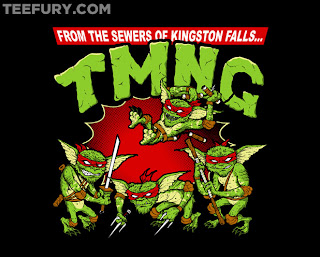 I have no reason to buy more t-shirts, seeing as I have a closet full of all manner of geeky t-shirts already. I used to be hooked on Threadless for artsy cool indie cred attire, but then they started making shirts with Disney characters on them and put their stuff up for sale at the Gap. I have nothing against Disney or the Gap, but those two things don't exactly stand hand in hand with what the initial Threadless mission statement seemed to be.

Somehow via the interwebs, I found out about TeeFury, an online only t-shirt factory that produces a new design every 24 hours. After that 24 hours is up, the shirt is gone forever and ever. On top of the 24 hours then it's gone gimmick, the other cool thing about the company is that anyone can submit a design for consideration. Considering that there are 365 days in a year, that's a lot of artists that can get a shot at some geeky t-shirt fame. The artist doesn't loose copyright of the image and they get a buck for every shirt sold (the two most successful designers have earned over $60,000).

The latest TeeFury design which I couldn't resist is this latest one featuring the Teenage Mutant Ninja Gremlins. The one I bought before that was one featuring a similar joke, but with Koopa's. I can't help but wonder how they get away with such rampant copyright infringement. I think it has something to do with parody laws...not positive.

The only anger induced from this lovely design and website is that on occasion my eyes wander south to the comments section. Comments sections are something I try to avoid on any website, mainly because they always seem to be populated by people placed there for the sole reason to make me furious. This specific thread highlight was a person who was angry that the artist got the shirt design wrong by putting all red headbands onto the Gremlins. They were confused, thinking that the Ninja Turtles being parodied here-in should have multi-coloured headbands. We all of course know that the real TMNT have all red headbands since they are of the same clan, that the multiple colours only came to be in an attempt for the toy companies to sell more action figures.

I don't mind someone being curious or mistaken about a geek topic such as this, it's just the attitude that they come across with. It's all anger and self righteousness in thinking they've caught someone in error and hence they are better than them. Not only do the real TMNT all have red headbands, most of the comics I read were in black & white...and I was always able to tell them apart.

Anyhow, anger at people who frequent message boards to spread negativity aside, I am looking forward to adding yet another cool geeky shirt to my collection.
Posted by batturtle at 1:56 PM