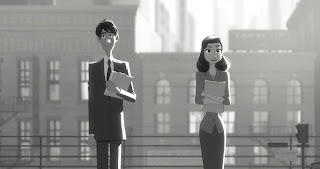 Just as excellent as watching Wreck-It Ralph at the Mayfair this weekend, was getting to watch the added bonus of a really great short film that preceded the feature film. I love it so much that the Pixar folks have added their tradition of shorts in front of features in front of the Disney films as well. Paperman is an amazing Woody Allen-esque New York City romantic genre mash-up of classic animation and computer animation at it's best.

Do yourself a favour and link over to my friends at Animationews to check out the short for yourself right now if you haven't had the pleasure of seeing it up on the big screen. I hope that Disney promotes everyone involved in Paperman up to a feature project making use of the same beautiful styling.
Posted by batturtle at 10:20 PM