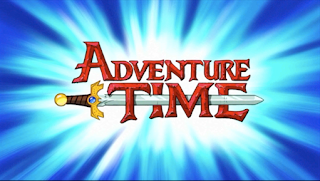 Another piece of popular pop-culture that I was late to the party for and completely unknowing of until recently is the cartoon phenomenon that is Adventure Time. I had the briefest knowledge that Adventure Time was a thing, overhearing someone talk about it once, and maybe seeing some merch at a comic store or convention. I had no specific hint as to what the cartoon was actually about though.

Then last Christmas, Adventure Time stuff made it onto my brother's wish list. My mum got him a DVD of season 1 and I got him a trade-paperback collection of some of the comics. I read said comic before wrapping it up and passing it off to him on Christmas morn. Even though I didn't know the voices of the characters as they would appear in their cartoon source material, and entered the reading of the comic not exactly sure what I was getting into, I really loved it. It was bright and colourful and fun and new and full of imagination. All of those things are a nice thing to have in both the comic book and animation mediums, since so much now-a-days seems to be dark and mean and not so kid friendly.

Long on my list of stuff to watch, I finally got around to viewing the actual cartoons. Similar in my description of the comic book, the cartoon was also bright and colourful and fun and new and full of imagination. All of those positive traits with the added bonus of music and sound effects and voice actors helping the story along.

What I like about Adventure Time, is that it's clear that the idea came before the merchandising. It's not just a half hour commercial to sell something, like so many cartoons of my youth were. It's a high quality show that just happened to be lucky enough to get a fan-base who were then interested in buying stuff spun-off from a show they love.

Like shows along the line of other modern classics like Powerpuff Girls or Spongebob Squarepants that came before it, Adventure Time is a showcase of kid friendly television animation at it's best. I've only managed to watch two episodes so far, makes me sad that there are all those other distractions in a day that keep me from just getting to watch cartoons more frequently.
Posted by batturtle at 4:54 PM