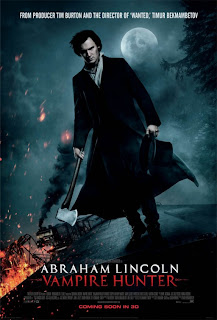 I have now seen the complete trilogy of U.S. presidential historical films released in 2012: Abraham Lincoln vs Zombies, Lincoln, and now Abraham Lincoln: Vampire Hunter. I'm not sure which one is my favourite. One has zombies, one has vampires, one has Daniel Day Lewis. Tough call. Though I will say that despite the cg vampire monster faces, a horror movie trend which I've never been very fond of, Vampire Hunter was surprisingly not horrible. That's a backhanded compliment at best, but I was expecting terrible and was rewarded with pretty good. I wonder what Abraham Lincoln part IV will be about?
Posted by batturtle at 10:41 PM