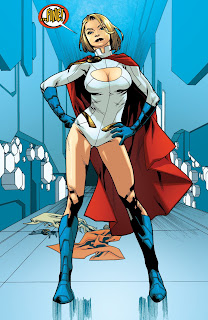 This slipped by me, but DC Comics has recently come to their senses and returned Power Girl to her original costume. Well, sort of...it has all those New 52 lines all over the place, but it's close enough. Much nicer than the costume that she was put into since the universe re-booted. Now, if the writing in the World's Finest comic would improve as well, I just might go back to checking out the adventures of one of my favourite characters. Until then I'll just go back and read the Justice League comics and Amanda Conner solo-book issues. I promise that I like the character for more than just the revealing costume. Put her in pants and a shirt without a big hole cut out of it and I would still think she was cool. I swear.
Posted by batturtle at 2:01 PM