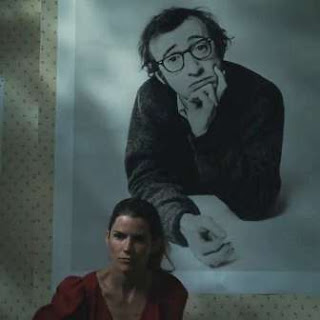 Sometimes I think the best way to see a movie that is actually pretty good, is to have first heard that the movie was really bad. Entering into a cinematic experience after having read a whole bunch of negative reviews makes a good movie somehow seem great. I had a hell of a time finding a critic to quote while writing about Paris-Manhattan for Mayfair purposes. It has rather poor numbers on both the Rotten Tomatoes and imdb. So, when I saw the film and I enjoyed it quite thoroughly, I was quite confused as to why it didn't receive a more favourable response from the critical masses.

Paris-Manhattan is the feature directorial debut from Sophie Lellouche and stars Alice Taglioni. It's a lovely French romantic comedy about a young woman obsessed with the films and philosophy of Woody Allen.She has a giant Woody Allen poster up on her apartment wall, and she even hears his advice giving voice via audio snippets from some of his classic works. All she wishes for is to be swooped up in a comical intelligent romantic entanglement straight out films the like of Annie Hall or Manhattan.

Any time that I see a movie like this that I am impressed with that the critics aren't, I get genuinely confused as to what more they could have possibly have wanted from this nice lil' tale. It's like when I find out that someone doesn't like Goonies or Army of Darkness or The Big Lebowski. I usually stand firm in my belief that movies are subjective...but in certain cases I must admit that I am a hypocrite if you disagree with me, and I would just have to tell you that you are wrong. If your spirits aren't lifted by the time the credits are rolling, especially after a great climactic pay-off, you might want to re-examine your state in life and try to cheer up.