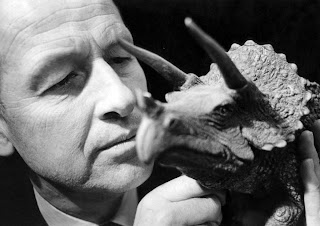 The great special effects master Ray Harryhausen died today. By happenstance, the Mayfair hosted a mini-festival of his work only two months ago. It was beyond glorious to see his monsters up on the big screen in all of their stop-motion animated glory.

I had the honour of meeting Mr. Harryhausen a few years back on one of my visits to the San Diego Comic Con. I got to tell him a story which I'm sure that he's heard an endless amount of times. My specific tale involved being introduced to his movies via weekend afternoons on TVO and PBS. I have distinct memories of watching his creations on the small screen (a small black & white screen at that) and being in a complete state of awe, having no idea at how such incredible creatures could be captured on film. If that wasn't enough, I also got to be in his presence while he did a live and one of a kind audio commentary on 20 Million Miles to Earth.

He was without a doubt one of the most important talents in the history of motion pictures who created all too rare true movie magic.
Posted by batturtle at 11:13 PM