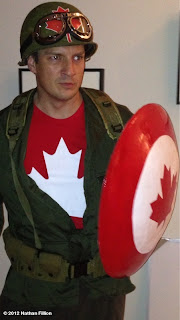 Today I was in the front row of a packed auditorium of geeks (thank you media badge), all there to see, listen to and ask questions of Nathan Fillion. If you ever want to feel what an out-pouring of love and admiration feels like, be in a crowd at a comic con when Bruce Campbell or Joss Whedon or Nathan Fillion step out on that stage. Nathan Fillion knows how to play the game, he is an excellent public speaker, he's genuine and funny and it is very clear that he is quite appreciative of the place he is in.

He had fellow Canadian and Firefly co-star Jewel Staite join him on stage, he crashed her panel yesterday because Summer Glau lost her passport and couldn't be in attendance. They were great on stage together, evident that they are actual friends and not just putting on a routine to appease the fans in front of them. By the time the time was wrapping up, he spoke of how proud he was as a Canadian and to be a part of the Firefly legacy and how thankful he was for these fans. Then he got choked up and had to hold back the tears. This made his on-stage friend cry as well, and I'm pretty sure all the geeks in the crowd were equally moved as they burst into a round of applause.

Moments like this make me set aside any feelings of negativity I might have towards some of the greedy aspects around celebrity and conventions ($70 bucks for an autograph!?) and make me happy that we are all a part of this wonderful geeky world that has evolved around us.

Will Wheaton gave a really great geek pride speech too. What a turn of event his life has taken when you take into account that in the late 1980's many Trekkie's had quite the hate on for him. Now he is a king of the interwebs and blogs and various forms of gaming. The mindset is pretty much that the geek title isn't all about billion dollar movies as our identity. It's about doing what you love and follow dreams and think big and don't care about how people judge. If you get punched in the stomach by a bully who then rips up the comic you were reading, and then return the next day and read more comics, you are proudly a geek. Geeks are brave and follow dreams and love things in a true and un-ironic manner. If you war an Archie shirt because you love Archie, you are a geek. If you wear an Archie shirt because it is retro and you think it is stupid, you are a hipster. Big difference.

Yes, I got also choked up when Nathan Fillion did. To be fair, so did the opening scene of JJ Star Trek and various scenes in Scott Pilgrim. I am an emotional geek.
Posted by batturtle at 10:56 PM