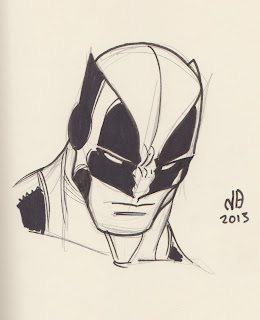 I interviewed Nick Bradshaw over the weekend for the geek doc that we are in the midst of filming. I mentioned the list of folks being interviewed to some of the other subjects, and every time that Nick's name was mentioned the response was that he's the nicest guy. I can confirm that these statements are true. An Atlantic Canada resident, Nick has a connection to Ottawa via attending college here, and he was very glad to have a comic con excuse to return. If you are not familiar with Nick's resume, please check out his work on Army of Darkness, Danger Girl, and his current run on Wolverine & the X-Men.

Nick was kind enough to draw me a quick pensive Wolverine sketch as we chatted and filmed, and I always like to show off the sketches I manage to acquire. I love the tiny pointy Wolvie ears.

Posted by batturtle at 1:03 PM