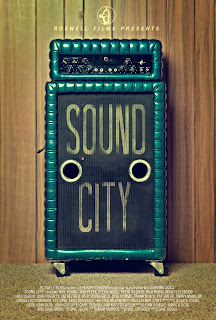 I am the perfect age to have been a die hard Nirvana fan, the band's breakthrough album was released while I was in high school. I was on hand for the rock n roll revolution that the Seattle band instigated, the copy-cat expensive fashion rip-off's, the Weird Al cover, the movie Singles, and everything else that spun out from the grungy, dimly lit,lyrically garbled high school gym set music video. I remember standing at the bus stop and being hit with the information that Kurt Cobain had committed suicide.

Luckily, the end of Nirvana was not the end of drummer Dave Grohl. He proved do have even more musical skills than that of a drummer when his Foo Fighters album was released, which although under the guise of a band was performed 100% by Grohl. Over the years, on top of putting together a number of Foo albums with an actual band backing him, he also filled up his schedule playing with bands the like of Queens of the Stone Age and Tenacious D, and participating in the music side of the pre-fame Beatles film Backbeat. He can also can be spotted cameo style in an episode of The X-Files or the most recent Muppet movie.

His latest project in a seemingly always packed schedule is taking up directorial reigns for the movie Sound City. The documentary focuses on a very special sound board from a gone extinct Californian recording studio that had everyone from Fleetwood Mac to Tom Petty & the Heartbreakers to (of course) Nirvana record on it. The doc covers both rock n roll history that has surrounded the device, and explores the evolution of the technology and changes to music production (very akin to film production and presentation that has effected the Mayfair over the past couple years). And of course it is filled with a whole bunch of amazing music...the highlight being a reunion of the surviving members of Nirvana with none other than Paul McCartney filling in on vocals.

Sound City has a couple more screenings at the Mayfair, tonight (Monday May 27th) at 9:30pm and Tuesday May 28th at 9:15pm