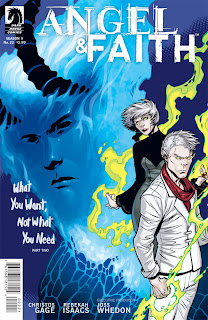 There's a spoiler-iffic reveal so great in Angel & Faith #22 that it reminded me of the good ole' days of commercial break cliff-hangers that held me in such entertained rapt attention back when Angel was a teevee series. I actually gasped in surprise. Much like when Angel gained a spin-off show from Buffy, I still am a fan of both, but Angel & Faith has been a better comic right from the first issues debut. Writer Christos Gage has done a fine job at the helm of the series under the creative supervision of mastermind and executive producer Joss Whedon, along with some great artwork from break-out talent Rebekah Isaacs. We're never going to get more live-action adventures featuring the vampire with a soul, thankfully we have comic books to fill the vampireless void.
Posted by batturtle at 2:03 PM