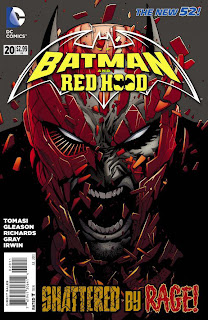 I was depressed and saddened and effected way too much then I logically should have been by the death of a fictional character when writer Grant Morrison recently killed off Batman's sidekick and Bruce Wayne's son Damian Wayne (aka - Robin IV). It's a compliment to the medium of comic books and its storytelling power, and the skill of the writer, that I was put in such a state of mourning.

The good news is that the young characters death has caused some excellent plot-lines to domino in effect in the aftermath. The Batman & Robin book is rotating through gust stars for the time being. Last issue was Tim Drake / Red Robin (aka - Robin III), this month is Jason Todd / Red Hood (aka - Robin III), next month is Batgirl. Jason Todd has a particularly knowledgeable history that identifies him with this current chain of events, as he is not only a former Robin...he's a formerly deceased Robin. This issue starts as a reunion team-up, and culminates into a rather tense father / son style clash.

This issue also features more from surprise new character, Carrie Kelly, the Robin from The Dark Knight Returns alternate time-line. Some comic nerds seemed angry at her inclusion in the New 52, but I like to actually read a story-line before forming an opinion. I always keep in mind that some readers were likely angry when Hal Jordan was Green Lantern instead of Alan Scott, or Barry Allen was Flash instead of Jay Garrick. Remember that a comic book, when at it's best, always takes risks and throws out shocking turns at its readers and attempts to surprise with soap opera in a cape caliber plot-twists.

I continue to hope that all this is leading back to a Damian resurrection. These are all good dramatic tales in the Batman line of books, but I don't care, I'd rather have that lil' punk 10 year old Robin in a hoodie back. Who will take care of Bat-Cow?
Posted by batturtle at 1:22 PM