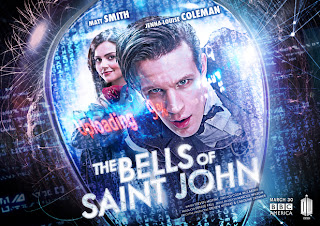 Nothing lifts ones spirits like a brand new episode of Doctor Who. Part of me wishes there were 25 episodes of Doctor Who every season with shorter breaks in-between. I must concede to agree with show-running mastermind Steven Moffat that having less of something great and building up anticipation due to waiting is not the worst thing in the world.

Conveniently enough, the latest episode can be viewed on the Space website. I haven't had actual teevee for years, and think that watching stuff in this website manner is really the best way to support the shows you love. Most of us never had Nielsen ratings boxes hooked up, so we were never supplying ratings points to the incredibly flawed teevee popularity ranking system anyhow. Where-as streaming a show and putting up with the mild inconvenience of a handful of commercials results in something teevee folks can measure and use to lure in advertisers, that in turn pay for budgets of those shows that you want there to be more of.

Click on over to the home of geeky Canadian teevee and watch The Bells of Saint John in all of it's Doctor riding a motor-bike and fighting the evils of the interwebs glory.
Posted by batturtle at 2:36 PM