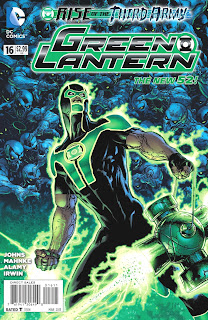 Geoff Johns run as writer of various corners of the Green Lantern portion of the DC Universe will soon come to its end. Shortly before his upcoming departure, he helped introduce the latest human member of the Green Lantern Corps, Simon Baz. Comic book writers are often cursed with a damned if you do / damned if you don't conundrum when writing good stories and appealing to the fan-base. On occasion some might complain that there isn't enough cultural diversity in comic book super-heroics. Then when an Arab-American who is a good man on the wrong side of the law is introduced into the crime-fighting fold, some nerds react negatively.

I've thoroughly enjoyed Geoff Johns extensive writing contributions to the Green Lantern mythos, especially when drawn by Doug Mahnke. I also think that the character Simon Baz has a lot of potential as being an interesting every-man hero in the midst of gods and aliens and universe threatening dangers. I always think that people who lash out and complain and moan about such super-hero comic book plot twists should maybe just stop reading them all together. They would have so much more free time to complain about other things!
Posted by batturtle at 3:41 PM