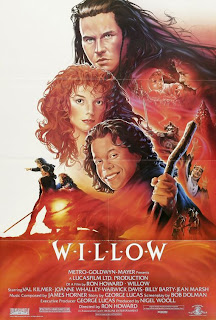 Watched Willow today, my belated birthday movie gathering. I know this is a controversial stance to some, and I'm not just saying this to anger swords & sorcery nerds, but I think Willow is totally a better movie than any of the Lord of the Rings franchise. It's more fun, I find the characters more engaging, there's more romance, better comedy and has a great score. If that weren't enough, the movie also has trolls, terrifying dog monsters, a giant two headed dragon, and a tiny lil' Kevin Pollack. I wish there had been more Willow movies. How come other 1980's movies like Revenge of the Nerds and Porky's and Police Academy all got multiple sequels, and yet only one Willow? Maybe now that Disney owns all the Lucasfilm library, they can bring back the Willow-vrse. Disney does enjoy telling stories starring princesses after all.