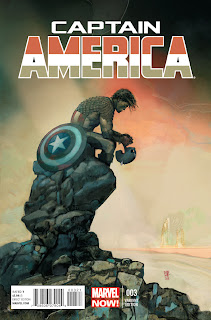 I stand corrected in my recent statement that nothing much good is coming out from Marvel now-a-days besides for Hawkeye. They do have a number of comics well worth checking out, the problem is that their bad to good ratio is dozens upon dozens to one. To be fair, the same mathematical divide exists in movies and teevee and books as well.

Along with Hawkeye, I also enjoy and can recommend Superior Spider-man, Wolverine and the X-Men, Daredevil, and FF. As a passenger on a road-trip to and from Toronto this weekend I got to catch up on a bunch of comic book reading. The multitasking of sitting, travelling, and reading is an excellent bonus to the over-all fun of a whirlwind of a trip with friends. Amongst other comic book reading, I got caught up on the latest numbering re-boot incarnation of Captain America. This series finds writer Rick Remender (who did a great job with an amazingly original twist on The Punisher) taking a Jack Kirby influence with the character and throwing him into an alternate universe. As an added bonus the series features the artistry of Marvel Comics legend John Romita Jr.

Any main-stream super-hero comic that has a fourth issue that opens with big white lettering on a page of black, "ELEVEN YEARS LATER", makes a geek sit up and take notice.